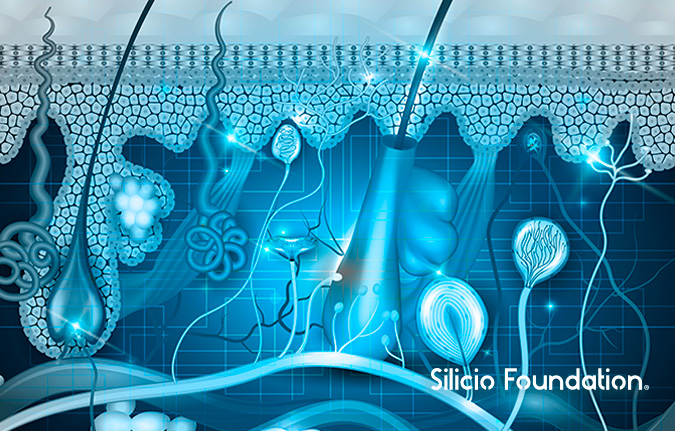 Silicon is the second most abundant element on the planet and can be found in various forms of life, It is therefore called an essential element. Organic silicon is a mineral found in skin, hair, nails, cartilage, tendons, bones, blood vessels, and heart valves, among others. The highest concentrations of silicon are found in the skin, in mucous membranes, and in connective tissue. During the aging process, a significant reduction in several trace elements is observed, and silicon is one of them. Starting at age 30 and beyond, especially in menopausal women, silicon levels decrease. The reduction os silicon levels results in decreasing of collagen synthesis by fibroblasts and in the activation of dermal collagenase. The main source of silicon in humans is obtained through absorption by the gastrointestinal tract, either from silica found in cereals, which has little bioavailability, or in the form of orthosilicic acid, which is found in water and beer, the most commonly absorbed form! In food sources, silicon has poor bioavailability because of its low solubility. Among the benefits of organic silicon are increased collagen and elastin synthesis, potentiating calcium fixation in bone tissue, promotion of nail hardness and stability, stimulation of hair fiber, which in addition to being more resistant to breakage also increases cord thickness, and maintenance of blood vessel elasticity. Organic silicon supplementation increases the concentration of this trace element, which favors the quality of natural aging. improves conditions related to silicon deficiency, and reduces the incidence of various pathologies. Organic silicon stabilized in a hydrolyzed marine collagen molecule (Exsynutriment®, Exsymol, Monaco) has high bioavailability because the stabilization of silicon in collagen prevents the formation of polymers, which impair its absorption by the gastrointestinal tract? In light of the benefits of ortho-silicle acid, of its role in collagen synthesis, and taking into consideration the scarcity of studies on the anti-aging process using the ortho-silicic acid stabilized by hydrolyzed marine collagen, this study aimed to evaluate how skin with signs of aging responds to oral treatment with Exsynutriment®.

This is a 90-day prospective, randomized, double-blinded study that was conducted at two private, independent dermatological clinics (Clinics A and B). Twenty-two Caucasian male and female volunteers from 40 to 60 years old were recruited. Exclusion criteria included pregnant women, breastfeeding women, patients with unrealistic expectations regarding possible outcomes, and patients currently taking or who stopped taking oral multivitamins, rejuvenation medications or who were taking systemic isotretinoin within the past 6 months. All participants enrolled in this study signed an informed consent. Randomization was generated using the Research Randomizer ot httpss/weww.randomizer.org. Patients randomized to the intervention group (Group I) received #0 capsules each containing 4600 me of Exsynutriment®. Those allocated to the control group (Group II) received 90 capsules each containing 600 mg of microcrystalline cellulose. Participants of both groups were counseled to take 1 capsule daily, at home, on an empty stomach, 15 minutes before breakfast for 90 days. The dynamics of conducting the study were as follows: each patient visited the Clinic A twice (at baseline and at D90); at baseline, an unblinded investigator (1) distributed the concealed treatments according to each patient’s allocation, (2) classified the phototypes according to the Fitzpatrick phototype scale from I to VI, and the degree of aging by the Glogau scale from II to IV, where II corresponds to moderate aging and IV corresponds to severe aging, and (3) captured standardized images of patients faces using Visia® Canfield Imaging Systems Inc. equipment. Ninety days later (D90O), patients returned to Clinic A to recapture images of thelr faces and to answer a questionnaire. At Clinic B, one blinded dermatologist reviewed and evaluated the paired images of each participant taken at baseline (DO) and at day 90 (D0).

Clinical assessment was performed by a blinded dermatologist who reviewed the paired images taken at baseline and at the 90th day. Clinical evaluation was based on ratings of brightness, wrinkles, texture, softness, firmness, overall appearance, and hydration of face skin. The skin parameter hydration was evaluated based on the presence of skin scales, crusts, xerosis, and skin brightness. Texture was evaluated based on the appearance of skin surface: uneven skin surface, presence of fine wrinkles, and scales were included in the analysis. Firmness included evaluation of 4 distinctive signs: eyelid folds, nasojugal folds, jowls, and neck profile. Responses were classified into 4 groups: 1—no result; 2—slight result; 3—good result; 4—very good result. Moreover, overall improvement was also informed by clinical evaluations and was classified as 1—no; 2—yes.

The subjective evaluation was assessed by a structured self-reported questionnaire answered by each patient at the end of the study and was also based on the same ratings as the ones for clinical evaluation.

The study involved 22 participants, 11 in each group. There were no statistical differences between groups for baseline characteristics (Table 1). No patient was undergoing Botretinain treatment or any dermatological procedures. 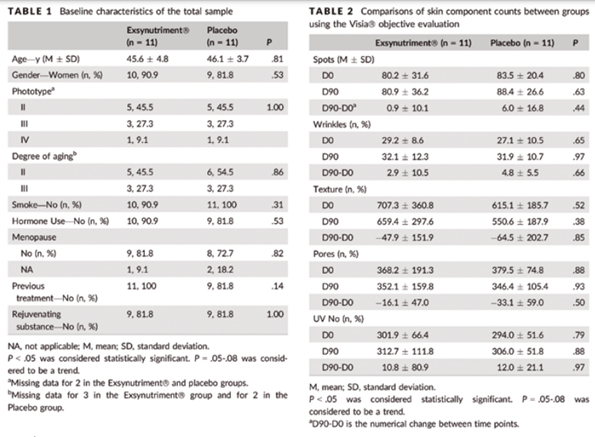 The evaluation of the objective assessments using the Visla® software between groups is illustrated in Table 2 and shows. no statistical difference between comparisons at baseline, D0, and skin component variations overtime. Visia@ images obtained at baseline and after 90 days of treatment with Exsynutriment® show visual changes in the skin components (Figure 1). 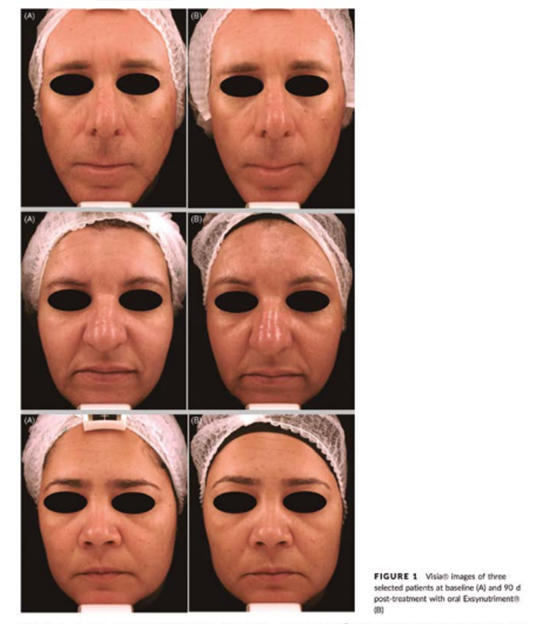 After 90 days of treatment, a blinded dermatologist reviewed the paired images of each participant taken at baseline and after 90 days (Table 3). Texture, finnness, and hydration were the aspects of skin that showed a significant difference between groups.

The subjective evaluation was assessed by a structured self-reported questionnaire answered by each patient at the end of the study. Comparisons between groups can be seen in Table 4. As observed in Table 4, brightness, firmness, and overall appearance show trends for differences between groups 1 and 2 (P = .06). No patients from the Exsynutriment® group experienced any side effects, skin reactions, hypersensitivity, or systemic symptoms. One patient from Group 2 reported stomachache and heartburn. Most participants fram group 1 (80%) were satisfied with the treatment, but all participants reported that they would repeat the treatment. While fifty percent of group 1 participants were satisfied with the treatment, 2 said they would not participate again.

During the aging process, several trace elements that are essential to maintaining homeostasis become deficient. and silicon is one of them. Silicon deficiency is associated with early aging in several organs, including the skin. In addition, the aging process yields structural skin damage and affects energy balance, resulting in dehydrated skin and delayed healing.

Skin aging is controlled by genetically determined individual factors (intrinsic factors), external factors such as cigarette use, pollution, chronic solar radiation, and additional factors such as stress, drug use, systemic diseases, and hormones. Thus, macroscopic changes on the surface and progressive, diffuse atrophy assaciated with cutaneous xerosis result in a thin and dehydrated skin with signs of depigmentation, decreased elasticity, and eechymosis. Tissue loosening, both muscular and cutaneous, and superficial and deep rhytids are also observed. In addition, the healing process is impaired in the aged, resulting in delayed tissue repair after spontaneous injuries or surgical procedures.

The reduction in collagen, glycosaminoglycans, and proteoglycans in the skin and the degeneration of elastic fibers contribute to the appearance of rhytids and skin sagging. In the skin, silican is essential for synthesizing collagen and contributing to enzyme activation and cross-linking. It also promotes connections between hyaluronic acid, proteoglycans, and water, which increase skin turgor and dermal hydration. Silicon replenishment stimulates the synthesis of hydroxyproline and type I collagen, and increases the density of elastic fibers, which increases the thickness of the dermis and improves the tensor properties of the skin.

Ortho-silicic acid stabilized by hydrolyzed marine collagen (Exsynutriment®) is an organic, water soluble, stable molecule with high bioavailability characteristics that are essential for bioactive compounds. Its oral consumption enables it to act in important processes for homeostasis maintenance and as an anti-aging agent. In addition, water-soluble silicon is chemically safe and nongenotoxic, as evidenced by in vive studies. Exsynutriment® is produced as a powder and primarily metabolized by the renal system.

Studies have demonstrated that the therapeutic supplementation of organic silicon strengthens nail and hair, increases collagen and elastin synthesis, promotes maintenance of vascular elasticity and increases calcium fixation in bone tissue. In addition, silicon plays an important role in healing wounds. In 1993, Lassus et al
carried out a study in 50 women where colloidal silicon was administered orally and topically to treat aging skin and hair and nail fragility in a dose of 10 mg of silicon per day, for 90 days. The researchers observed, by ultrasound examination, an increase in dermal thickness and an improvement in hair and nail fragility.® Later, Barel et al evaluated the effect of daily supplementation of 10 mg of cholinestabilized organic silicon in a double-blind study on the skin, hair, and nails of 50 women with photodamaged skin aver 20 weeks. The study showed improvement in skin texture (P < .005) and nail fragility; besides, the safety of silicon supplementation through baseline and post-treatment laboratory tests, including renal and hepatic function, lipid profile, and renal excretion of silicon, was demonstrated. Another study by Villa et al evaluated the daily use of ortho-silicic acid stabilized by hydrolyzed marine collagen 600 mg during 5 months demonstrating positive results on hair quality. The recommended daily dose of Exsynutriment® is 100-600 mg. which corresponds to 5-10 mg of organic silicon per day for adults weighing 60 kg. The current study evaluated the maximum concentration of oral ortho-silicic acid stabilized in hydrolyzed collagen and demonstrated clinical benefits. Exsynutriment® is currently the most commonly prescribed product by dermatologists in Brazil for the treatment of oral rejuvenation and skin sagging, and its supplementation is safe, even in the long term.

This original work describes for the first time the benefits of 90 days of ortho-silicic acid stabilized by hydrolyzed marine collagen treatment, which yielded improvements in firmness, hydration, and texture (P < 05). Although other parameters tested did not have statistical significance, the data are clinically relevant and are in agreement with studies using Visia®, Studies with a larger, representative sample of the population should be conducted in order to prove the efficacy of this treatment. Rates of satisfaction among patients receiving the treatment were greater than those receiving placebo. All patients tolerated the treatment, reported no adverse effects, and announced that they would use the product again.

Limitations of our study are the short follow-up period and small sample size. In addition, histopathological analyses were mot performed to evaluate the treatment’s effect on collagen production, and serum levels of silicon were not measured. According to Brazilian regulamentation (ANVISA-ABNT 316L), the metallic alloys used to fabricate puncture needles contain silicon; because of that, in the moment of puncture, the needle contaminates the sample with silicon, leading to values that do not correspond to the real serum values. Thus, the authors acknowledge the need for future studies with larger sample sizes, longer follow-up periods, and histopathological evaluations.

People are constantly searching for beauty products to prevent aging, but do not know which supplement will yield the desired effect. The oral use of organic silicon stabilized in a molecule of hydrolyzed marine collagen has been proven to be an anti-aging option, as it recovers the degenerative changes of the extracellular matrix and stimulates the synthesis of collagen, promoting improvements in skin firmness, texture, and hydration. The clinical results obtained in this study are promising and highlight the need for a greater number of studies on this topic.

The authors state no other conflict of interest. 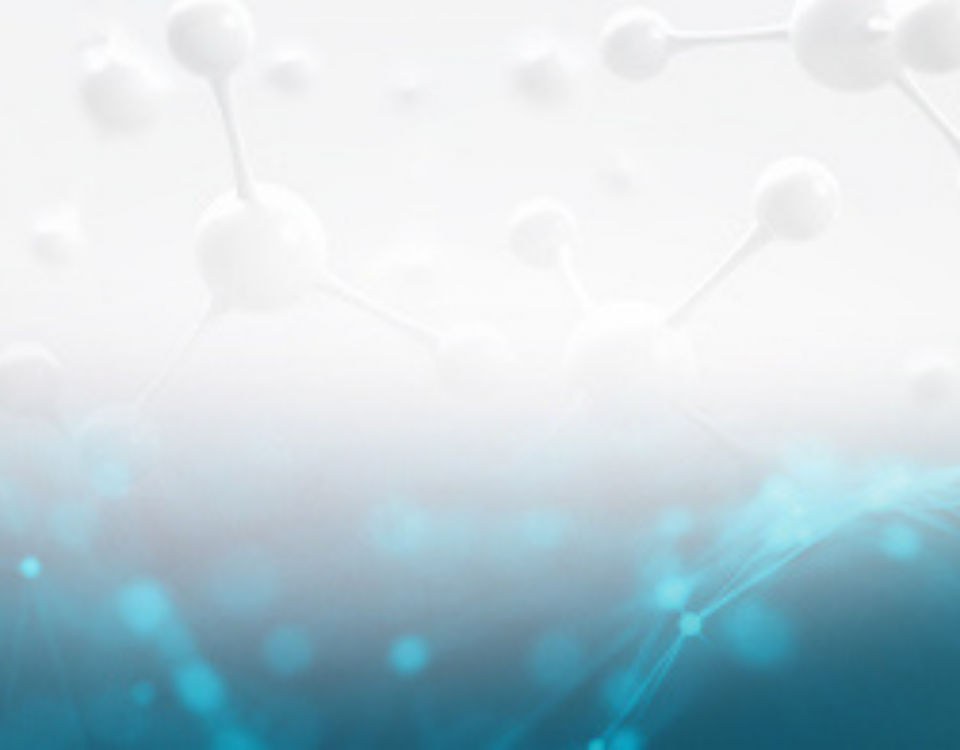 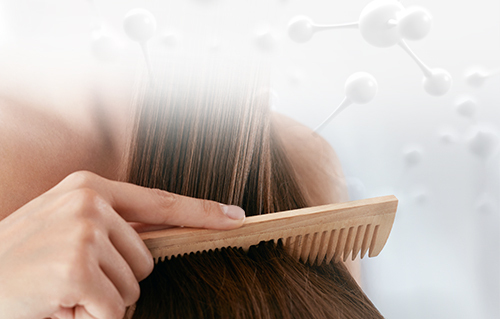 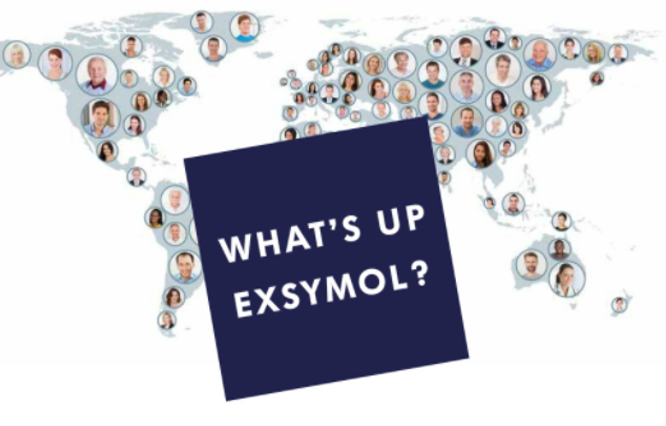